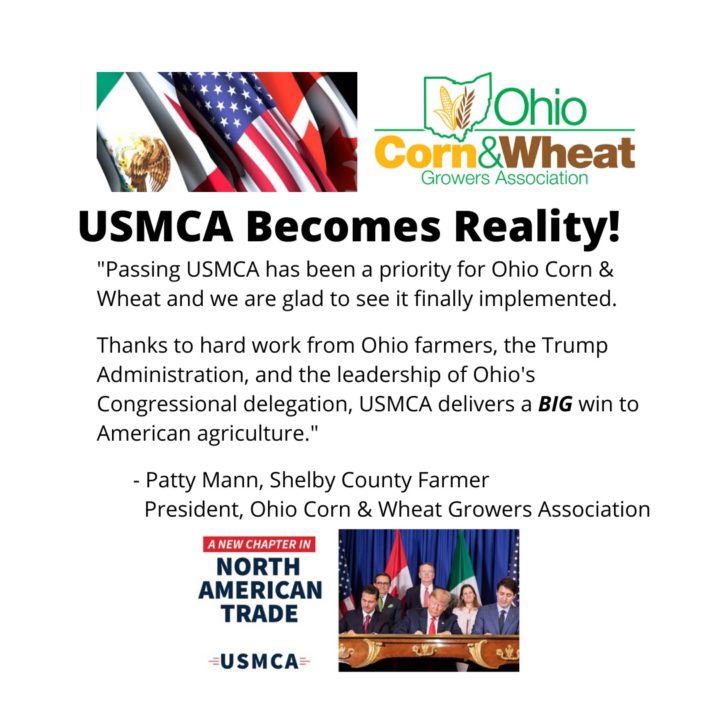 (Delaware, Ohio) The Ohio Corn & Wheat Growers Association (OCWGA) is excited that today is the day the United States/Mexico/Canada (USMCA) trade agreement’s enactment is official. OCWGA members spent a lot of time and effort to assist in getting this important trade update signed, ratified, and implemented.

OCWGA President, Patty Mann, made the following statement regarding today’s start of USMCA: “Opening market opportunities is the highest priority for our grower-members, and the USMCA makes major strides in protecting our largest foreign markets – Mexico and Canada. Free trade agreements like this one help us feed and fuel the world. This has been a toughly negotiated trade pact and Ohio grain farmers will be better off because USMCA is in force.”

Tadd Nicholson, Executive Director of Ohio Corn & Wheat added: “Since a potential deal was first announced in September 2018, our members have worked relentlessly to advocate for USMCA with Ohio’s congressional delegation. We are grateful for the broad, bi-partisan support and leadership our delegation has demonstrated on this final agreement and enactment today.”